motorcycles BY Quinn May 12, 2018
As the world turns towards more and more eco-friendly options of some of our daily devices and objects, it is important to find things that still bring us a thrill without leaving a large economic footprint or killing a rainforest. With hybrid vehicles sweeping the nation, it is no surprise that the world of electricity as a power source has made its way to the biking atmosphere. Electric dirt bikes for adults are the ideal choice for the nature conscious consumer who still loves the thrill of dirt trails and daunting jumps. Offering a 42 Mn torque, a KTM powerpack, and a state of the art control unit, the Free Ride E –XC 2018 NG Electric Dirt Bike by KTM is worth checking out. The Free Ride E-XC engine is perfectly adaptable for road use, and has no problem transitioning from rough dirt bike paths to the suburbs. The control unit is state of the art and offers an effective response rate to the bike. Three ride modes are available, from economy (30 miles per hour), endure (power restricted to 16 kW ) and cross, where the power goes to full throttle at 18 kW. Using an industrial standard IPM motor and made in Europe, the Kalk Electric Bike by Cake is the electric bike of the future. The simplistic, minimalistic design is as easy to look at as it is to maintain; no mess, just a 50Ah battery that offers a powerful torque and range. The bike weighs in at a mighty 70 kilos, making it on the lighter side of things and uses a single pivot direct drive that reduces the number of heavy parts. With top speeds at 50 miles per hour while offering about 3 hours of riding between charges, you can enjoy off-roading for several hours while keeping up with the fuel dirt bikes. Intended for light off-road performance, the bike quietly glides along many terrains due to the 3 riding modes offered. Featuring amazing specs such as 50 horsepower, 147 FT –LBS torque, and a 1.5 hour recharge time, the Redshift MX Electric Dirt Bike by Alta Motors is built for top performance. The 259 pound electric bike has more torque than its predecessors and is just as efficient as a trail and woods bike when you take it on multiple terrains. The upgraded R5.8 battery pack is a super-dense battery system that effectively fuels high performance electric motorcycles, and contributes to the high speeds this bike can reach. The bike features an eco, sport, performance and overclocked mapping systems depending on your biking needs. Perfectly at home on both a rugged path in the woods or a city street, the Zero FX Electric Dirt Bike is as good looking as it is functional. The Zero FX’s Z-Force 75- 5 motor offers a mighty 78 lb –ft of torque, so you will take off in an instant when that light turns green. The battery is incredibly smart; even breaking at a stop sign will send a short recharge to the battery, so you’re never wasting resources. The Zero Motorcycle app allows for customization between an Eco or Sport modes, so the performance can match your needs. A simple 110 volt household outlet will do the trick to recharge your ride, so no need to worry about finding a specialized recharge station. Powered by an effortless and silent Z- Force powertrain, The Zero DS by Zero Motorcycles churns an intense 116 ft-lbs torque that surpasses a fuel-burning production counterpart dirt bike. Perfectly crafted to handle any terrain, you’ll have no problems taking this bike from smooth streets to a gravel path with zero effort when you press the master terrain button. The Zero Motorcycles app allows you to adjust and customize the bike’s performance. One hour of charging will bring you about 94 miles, offering a charge that is 6x faster than most other electric dirt bikes. All of the low maintenance you expect from an electric dirt bike, no oil, fuel or other maintenance needs will be found. With the possibility of also being used as a trail bike, the EM 5.7 Escape by Electric Motion offers a silent, pollution-free dirt bike experience that is powered by a 40 AH battery. Ergonomically designed with you in mind, you can comfortably ride the EM 5.7 Escape for long periods and on multiple terrains, thanks to its nimble torque power. The one hour charge keeps your wait time to the bare minimum while you sport around the city. Featuring a recharge button that recharges your battery while you gradually coast downhill, and brushless DC engine that offers the power of a fuel dirt bike. Offered in both a 8 Kw and 12 Kw motor output, the FreeRider Electric Dirt Bike by Kuberg is the perfect eco-friendly bike for any adrenaline junky. The 22 AH 48 volt battery pack offers a 2 hour ride at its ultimate speed, and the battery will recharge completely in about 2.5 hours. The Kuberg app can be downloaded to track your ride, control your bike’s function, and monitor your battery level; everything at the touch of a finger. The tough Manitou Dorado Expert 180 mm forks with air pumps are created to withstand intense jumps and difficult terrains, while the DNM Burner RB –RCP shock absorbers keep your ride smooth. 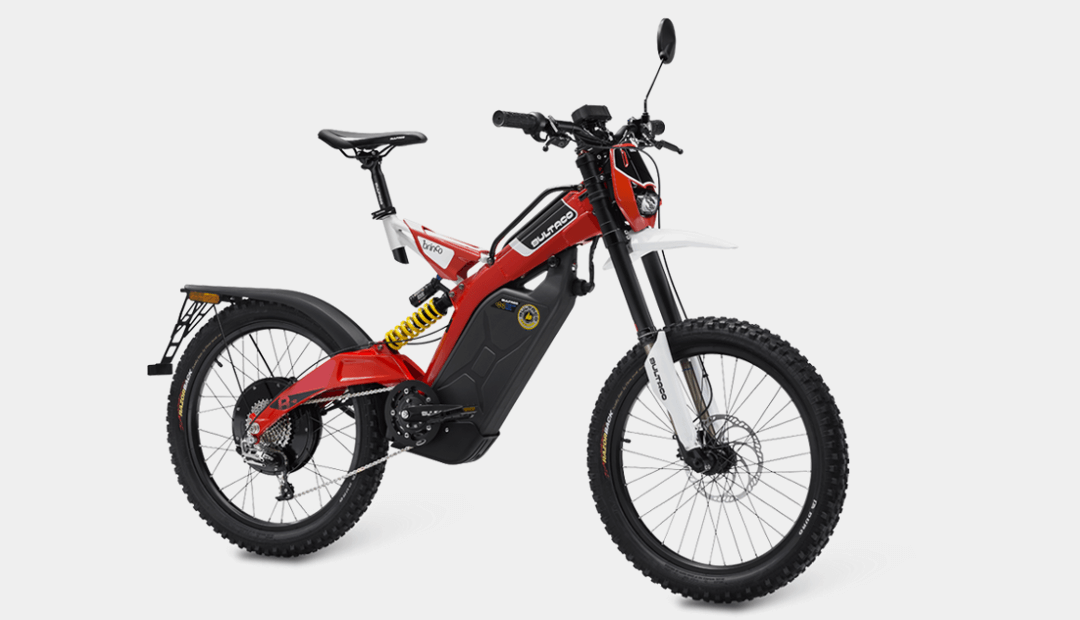 For the dirt bike enthusiast who still looks for opportunities to get some exercise in, the Brinco R Electric Dirt Bike by Bultaco is the one to take a look at. Featuring petals for independent biking when you want to save some battery juice or feel the need for a cardio workout, the Brinco R combines both biking worlds in a great package. Three ranges are offered; Eco ( up to 30 miles per hour), Tour (47 miles per hour), and Sport (67 miles per hour) depending on your expertise and purpose of your bike trip. A three hour recharge time and a 1.3 kWh lithium ion battery create an eco-friendly, completely mess free dirt bike experience. Another great option for the dirt biker who may want to hit the trails for some cardio, the MX Electric Dirt Bike by Sur-Ron is powerful, affordable, and versatile. With top speeds at 45 miles per hour, a custom dashboard, USB charger, and high torque, high-tech meets classic dirt bike thrills with the MX series. An aluminum frame supports the removable 60 volt 33 ah Panasonic battery which recharges to full in a quick three hour turnaround time. A standard and sports mode is available depending on the purpose of your bike, while the option for just a good old fashioned biking session still exists with pedals on each side. Inspired by winning motocross rider Jeremy McGrath, the SX500 McGrath by Razor is the stylish, patriotic, and fully functional electric dirt bike you need to add to your collection. Featuring McGrath graphics and authentic design, a high torque power, a variable speed motor and 40 minutes of continuous use on dirt hills, the SX500 is the bike to reach for during competitions or simple trail jumps. Dual suspension handle bars, a retractable kickstand, hand operated dual disc breaks for breaking accuracy, and a quick charge all come together to create this unique bike for younger riders.

A few of Electric Dirt Bikes benefits are:

NO MESS: With a fuel bike, you are dealing with messy oil changes, greasy lubricants, trying to fill the gas tank without spilling it everywhere, and dirty exhaust pipes. These upkeep items are not only costly, but create additional chores for you in the world of bike maintenance. With a battery powered dirt bike, you are eliminating the mess and hassle completely by simply plugging in your bike to a power source.

SPEED: If you are thinking that to convert to a battery powered dirt bike will sacrifice on speed, you are far from correct. Automatic Electric dirt bikes don’t require the need to shift, and can take you from stagnant to bolting in a matter of seconds. Many bikes offer a sports package for extra power, speed and acceleration for the true bike junkie. An electric dirt bike offers all of the same thrills as its traditional fuel counterpart.

STYLE: Originally when electric dirt bikes first hit the market, the main complaint from consumers went around the “awkward” shape and style of the bike. Oftentimes the battery pack enclosure was extremely large and bulky, while the remainder of the bike stayed sleek and traditional. Fortunately, as big name brands such as Harley Davidson started releasing electric dirt bikes, the designers worked their magic in creating a bike that looks identical to a fuel-running dirt bike. Some may even say electric bikes look better; they are often lighter than traditional bikes and can be offered in a more sleek or compact design.